Thanks to a warm fall, we made it pretty far this year before having to turn on the heat. This morning I finally caved. I was hoping to make it through the weekend (it’s supposed to warm up), but no such luck.

We did endure the lowest inside temperature we have in five years, so that’s something.

Here’s how this year stacked up: How about a story about a grill for the Fourth of July?

About a month ago grilling season began in earnest (we had a rainy spring around here) and we discovered that our grill had finally succumbed to rust. Of the two burners, only one would stay lit and the flames were iffy at best, spilling out of the rusty burner in such a haphazard fashion they were barely safe for hot dogs. Which is a sad state of affairs for grilling season. Trying to replace the burner went nowhere. The grill was done. Which is a sad end to a good grill.

The grill was a wedding present from my brother. But we lived in Minnesota, he lived in Michigan and the wedding was in Wisconsin. The car he drove to the wedding was too small to transport the grill, so it stayed in Michigan until the next time we visited. No big deal. But 11 months later when we returned to Michigan we no longer had the truck I was driving when we got married. We were now driving a little four-door sedan with a non-grill compatible trunk. So the grill came out of the box in order to fit in the trunk. This was back before grills came ready for “quick assembly.” We had a thousand grill parts wedged between our luggage. Remarkably we managed to get all the parts in the car and were finally able to take our wedding present home.

Home to our apartment that lacked a balcony and a patio. The grill parts went into the closet.

Two and a half years later we bought a house and were hosting a painting party with promised grill food for anyone willing to help. I was still at work, so one of the volunteers, our friend Lance, was assigned the job of assembling the grill parts. Cries of “‘Le grille’?! What the hell is that?!” could be heard all day long.

And so three and a half years after our wedding the wedding present was finally put to good use. Grilling season had begun.

Last week we realized we’d lost enough of grilling season with nothing to show for it but poorly cooked hot dogs. So last night we picked up a new grill and Abby assembled it today (yes, I do enjoy sub-contracting my grill assembly work). We christened the new grill on the Fourth of July with grilled chicken for pizza that neither of our kids would eat. We convinced Lexi to try a piece of grilled chicken and she actually spit it out and declared it gross. Except for the hot dogs, grilling season is lost on her.

So we have a new grill. It doesn’t have as cool of a story as the old grill, but it provided flame-cooked meat on the Fourth of July. What more can you ask for?

We finally turned on the heat. We came home from a weekend away to find the house at 63 degrees. After much complaining I finally caved and turned it on (nevermind that it was 62 the other day and going one more day would have set a record).

On the upside, 2010 is now tied with 2005 for the longest we’ve ever gone without turning on the heat. Of course in 2005 it was 55 degrees in the house, so we could have lasted longer. But back then there were no children and Abby was pregnant, providing her own built-in heater. I think we only made it this long this year because it’s been so unseasonably warm.

It’s now a comfortable 67 degrees in the house—perfect temperature for a Cosby sweater. Complainers can go put on another shirt or go clean something. That’ll warm you up!

I continually find this information fascinating, so here’s the rundown of when we’ve turned on the heat for the last few years:

It’s been an interesting exercise. At any rate, I found myself trying to describe our family as financially responsible and frugal and trying to give realistic examples to back it up. I kept wondering what other people do to be cheap. After all, one person’s frugal is another person’s extravagance. One person’s necessity is another person’s luxury.

I want to share a few areas where I think my family is being cheap—not to brag, but to share some thrifty ideas. I hope you’ll share your thrifty ideas in the comments. It’s kind of a touchy subject because everyone has different values (cable TV may seem like an extravagance, but if it’s your only entertainment expense and you never go to the movies or buy DVDs that might be pretty economical), but I hope maybe we can learn something from how others have done it. Saving money is always good, but especially in this economy.

END_OF_DOCUMENT_TOKEN_TO_BE_REPLACED 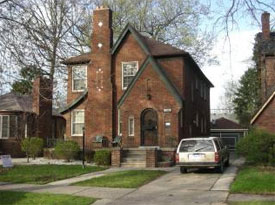 Last week I heard a pair of reports about Detroit on NPR and as usual it hit my soft spot for the Motor City. I spent Saturday morning checking in on Detroit sites (like the incredible parenting/photography/urban living blog Sweet Juniper) and reflecting on the crumbling nature of one of America’s great cities.

You always hear about the ridiculous real estate prices in Detroit (one NPR story mentioned a $500 house) so I decided to see how crazy it the market really is.

I used the mortgage calculator just for kicks (would they even give you a 30-year mortgage for a $20,000 house?). Your mortgage would be $117 per month.

All of which makes me want to move to Detroit.

END_OF_DOCUMENT_TOKEN_TO_BE_REPLACED Today I borrowed a truck and drove up to Wyoming, Minn., to pick up some firewood. Despite my disdain for the helplessness of Craigslist, I went there looking for firewood and came across this ad of two kids selling firewood to raise money to buy a goat through World Vision. Awesome.

If I have to buy firewood I’d rather help a couple kids help people in need.

I broke down today and turned on the heat. Milo’s sniffles and an inside temperature of 63 degrees seemed like a combination for bad parenting. Currently the thermostat is set for 67 (aka the cheapskate setting) and it feels nice and toasty. Nothing like taking the edge off.

Here’s the breakdown of when we turned on the heat the last few years (I don’t know why I find this fascinating, but I do, so roll with it): It’s a fine tradition, but I’m happy with a fake tree. It’s cheaper, you don’t have to pick up all the needles, and you don’t get stabbed by all those needles when you’re putting the ornaments on. Plus we travel so much at Christmas it doesn’t make any sense.

It also seems like a lot of effort to chop down a real tree every year just to put it up in your living room for a month. Real trees can be recycled, but there’s still a lot of energy and effort that goes into that industry. The fake tree can at least be reused every year—and they’re used so infrequently they could easily last 20 or 30 years.

So call me a Scrooge, but I like my fake Christmas tree.

Maybe someday we’ll have a digital Christmas tree and then it’ll be even easier!

I turned the heat on today. I blame Lexi. She’s borderline sick today and keeping the house at 61 degrees doesn’t seem very wise. Though all things considered, it’s the second latest date we’ve turned on the heat:

It might help that I’m going to be homeless tonight and the thought of a warm house is more than enticing.