Celebrating my 30th birthday with clean water and a clean shave.

This was truly the best birthday ever. Thank you.

The Bald Birthday Benefit is now over, but if you’d still like to give clean water, you certainly can. $20 gives clean water to one person for 20 years.

Read the latest updates, including the Walking for Water event on June 7 (read the Pioneer Press article).

Why Water?
In late March 2009 we traveled to Ethiopia to bring home our son Milo. While there, we witnessed the reality of unclean water:

We know firsthand what a lack of clean water can do. 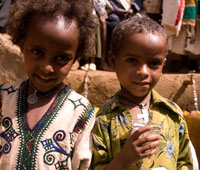 charity: water is an organization that brings clean, safe water to people who need it. For $20 they can provide one person with clean water for up to 20 years. They’re great about proving their work and partnering with organizations already on the ground (Living Water International, A Glimmer of Hope, Healing Hands, Concern, etc.). They do a lot of work in Ethiopia (and recently dug new wells there), they’ve been featured on CNN and ABC News, they recently landed a AUS$50,000 donation from Hugh Jackman thanks to their social media savvy, and 100% of money donationed goes to water (administrative costs are covered by private donors). 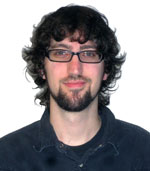 The Goal
The initial goal was to raise enough money to provide 30 people with clean water (that’s $600) in the 30 days before my 30th birthday. If we did it, I offered to shave my head. We reached the goal in a mere six days. I’ll shave my head on June 13.

Now we’ve upped the goal to $5,000—the cost to build a well in Ethiopia. An audacious goal, yes, but a worthy cause. It’s the Bald Birthday Benefit 2009. Please consider donating.

Update: Time to up the ante. If we hit $5,000, in addition to shaving my head, my beard, my goatee, my soul patch and my mustache, I’ll shave my legs.

How did you come up with this crazy idea? Fast-forward 11 months without a haircut and I’m starting to look like a hippie again (or maybe early 1980s Bono?). But rather than actually pay money for some stylish haircut, I thought it was time to go bald again. I like the idea of forsaking fashion in the name of charity. It might just be a new tradition.

Isn’t $600 kind of a lame goal compared to last year’s $2,000?
Maybe. But last year was a much more personal plea. It also helped that I mailed nearly 250 letters to friends and family asking for donations. I won’t be doing that this year.

Why don’t you just ask for a book or a DVD like everyone else does for their birthday?
Because I don’t need that stuff. Every year for my birthday my family usually gives me wads of cash and I spend the next month and half deliberating over how to spend it. Occasionally I have a big purchase in mind (like last year’s camera!), but usually it gets frittered away on books I don’t read, DVDs I could get from the library or snacks at Barnes & Noble while reading magazines. Nothing wrong with any of that, but I’d rather do something more important for my birthday.

Is my donation tax deductible?
Yes. You’ll get an e-mailed receipt from PayPal. Print this out and keep it for your tax records.

Can I donate offline?
Yes. Checks can be made payable to Charity Global. Put “charity: water” in the memo line. You can send your donations to:

If you decide to donate this way, please send me an e-mail letting me know how much you donated so I can add it to our goal. If you don’t let me know, your donation won’t count towards the goal (and my impending baldness). You could also just sent your donation straight to me and I’ll pass it along to charity: water (this isn’t tax deductible, but it is easily added towards the goal).

Are you shaving [fill in the blank]?
I’ll be shaving my head down to the stubble (i.e., I’m not using a razor—the wife isn’t thrilled with this plan in the first place and she hated the ‘velcro’ feel of my freshly razored head), eyebrows not included. The facial hair is honestly a tossup at this point. Maybe we’ll make the facial hair a bonus. If we raise more than $600 I’ll start shaving the facial hair: