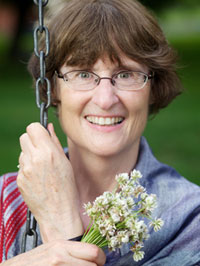 You can’t explore books about Ethiopia without coming across children’s author Jane Kurtz. She grew up in Ethiopia with her missionary parents in the 1970s and has published dozens of books, a number of them focusing on Ethiopia. Her latest success has been with the American Girl series Lanie. Jane currently lives in Lawrence, Kansas, and is planning a trip to Ethiopia next month.

1. What’s your favorite memory about Ethiopia? What’s the most distinctive thing about the country that clearly says to you, “This is  Ethiopia!”?

I lived in Ethiopia for most of my childhood—in the countryside and in the city, as a toddler and as a kid and as a teenager, with my family and in boarding school—so I have a tangle of memories from all that time. I love the sense of connectedness and relationship. People pay attention to their families and sometimes even strangers in intense ways. I love the sensory richness: the smell of bere bere that soaks into everything, the unexpectedness of donkeys on a busy street.

2. How has the country changed from when you grew up there in the 1970s?

My family left Ethiopia in the mid-1970s and I didn’t return for 20 years, although my brother and oldest sister both lived and taught in Ethiopia in the late 1980s. The countryside of Ethiopia is unchanging and unchangeable in many ways. In the city, though… whew.  It’s become huge.  Full of traffic.  Heartbreak multiplied.

3. What’s the political climate like? I know they just had an election that was contested by the opposition—is that tricky to navigate?

It is tricky to know exactly what’s going on with politics. I’ve seen in watching Ethiopia move from a land of emperors (and also from watching systems slowly change in other countries where tradition roots run deep) that it’s easier to set up elections than it is for one person or group to truly share power. Ethiopia’s history is rich and complicated. I read recently that for nations to exist, people have to have short memories. Ethiopians have long, long memories. I’ve studied some of the country’s historical periods, and it seems the same issues are still being debated and fought over today as hundreds of years ago.

I grew up loving to read in a country where my parents helped with a school but the children in that school didn’t have books. I’m really proud of my volunteer work with the nonprofit that has planted 50 libraries for children so far. Thousands of kids in Ethiopia learn to read but have no books to read. When I think of the ways that books, newspapers, magazines, opinion pieces, poems… have opened me up, made me more thoughtful, made me more hopeful, made me more compassionate, made me more curious… can change poverty in one generation (as it did in my own family)… the hard work feels worthwhile. It is intensely hard work fundraising in this economy, though! I hope schools and families and Rotary groups and individuals will hang in and keep giving what they can.

5. You’re also planning a trip to Ethiopia in July. How long will you be there and what will you be doing?

I’ll only be in Ethiopia for a week, but the rest of the group will be there all of July. K-State applied for a grant to Fulbright-Hayes—money that is set aside to help U.S. teachers learn about the world and bring what they learn to their own curriculum. Fifty-six teachers applied. We accepted 12 who so far seem to be a fabulous team. We will listen to smart, interesting Ethiopians talk about their projects and challenges and passions—and we’ll see and touch and smell and taste and hear new things—and the world will shift a teeny tiny bit on its axis.

6. What has been your most popular book so far?

Probably the Lanie books, which go with the 2010 American Girl doll of the year—although that’s always a complex question. Fire on the Mountain has certainly stood the test of time, since it was published in 1994 and is still discovered anew every year. I’ve been tickled by the little kids (including my own great-niece) who tell me Rain Romp or Do Kangaroos Wear Seatbelts? are their best books ever.

7. Lanie and the American Girl connection seems like a great opportunity—how has that changed things for you?

This year, it has changed things enormously because almost my entire spring was taken up visiting American Girl stores (where I signed for the most enthusiastic, charming fans in the world) and introducing Lanie to the world. In general, though, every freelancer always has to be looking for the next opportunity, the next break. I suppose I see Lanie as only my latest. Some authors have had a complete career-changer of a book. I never really have. It’s too soon to tell if Lanie will be.

8. Why did you start writing books about Ethiopia?

I grew up thinking Ethiopia was magical and amazing and wondrous and, at the same time, knowing bone-deep that people in America didn’t know anything about it. Worse, they kept asking me crazy questions like, “Did you see Tarzan?” It was deeply satisfying to be able to creak open the door a bit, through my writing, and show glimpses of beautiful Ethiopia.

9. How have people responded to your books on Ethiopia and Africa in general?

Lots of people have deep terrors about Ethiopia—and Africa in general. Why shouldn’t they, when most of the stories we hear and read are so grim? So I always feel flutters of resistance around the edges. At the same time, lots of people are fascinated with Ethiopia.  Lots have heard a bit. People wonder. The Ethiopian adoption community has been huge in helping my Ethiopia books stay in print and get out there where parents, kids, communities around adopted children (schools, libraries, teachers, relatives) can read them. That’s a gift!

10. My dad raises pigeons, so Only a Pigeon grabbed my attention, and it’s not the only children’s book on pigeons I’ve seen. Just how commonplace is it for Ethiopian children to raise pigeons?

I don’t know much firsthand about Ethiopian kids and pigeons. Andualem’s pigeon care and fierce contests were my brother’s experience, shared with me (and I shared my writing skills with him—now he’s published his very first novel on his own). But apparently it’s very common. I’ve heard that not only from my brother but from grown-up Ethiopians who discover Only A Pigeon and talk to me about the memories it stirs.

Thanks Jane. You can find more of Jane’s books on Amazon and you can check out her blog or Twitter feed for the latest updates.